Bitcoin (BTC) recovered to $38,000 as Wall Street opened on Feb. 22 amid a tense atmosphere over geopolitical instability. 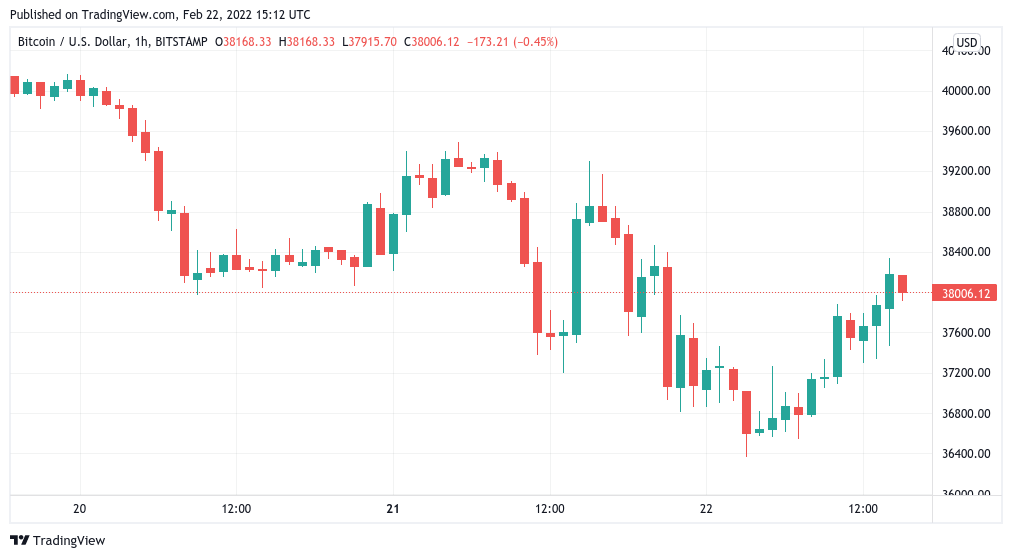 Data from Cointelegraph Markets Pro and TradingView showed an eerily calm start to the first Wall Street session of the week for both stocks and crypto.

Fears had been high of a dramatic bout of volatility accompanying the open thanks to Monday's announcement by Russian President Vladimir Putin that he would recognize two breakaway republics in eastern Ukraine.

Sanctions, still being announced at the time of writing, were likewise assumed to be about to fuel the fire, but on the day, there was little movement.

The S&P 500 was all but flat thirty minutes after trading began, leaving Russian markets as the main losers and gold as the standout winner.

"I think that we're going to open in the red and then, immediately bounce up on the risk-on assets and have a slight correction on Gold," Cointelegraph contributor Michaël van de Poppe previously forecast.

Fellow trader and analyst Scott Melker meanwhile focused attention on the potential for the Russia-Ukraine debacle to influence policy at the United States Federal Reserve.

According to banking giant JPMorgan, the effect of a potential conflict could be to make the Fed abandon the veracity of its planned interest rate hikes this year.

According to a note published Tuesday quoted by various media outlets, analysts at JPMorgan believe that the trigger for a Fed rethink would come in the form of commodity price increases.

“Russia-Ukraine tension is a low earnings risk for U.S. corporates, but an energy price shock amid an aggressive central bank pivot focused on inflation could further dampen investor sentiment and growth outlook,” they wrote.

Traders take Bitcoin's recovery one step at a time

Looking ahead on Bitcoin, popular trader Anbessa meanwhile eschewed calm as BTC/USD conformed to expectations without a significant trend violation.

A potential support/resistance flip near $37,700 was on the cards, he said, this hopefully becoming an important feature for the higher timeframe chart going forward.

If you expect the HTF S/R flip u don't care how high #BTC pumps shortterm.

Patience is a virtue. Today #BTC followed the projection after hitting $45,8k and while your Guru panics, you have to know throwbacks are healthy.

As Cointelegraph reported, however, Bitcoin and altcoins remain off the radar for the majority of mainstream consumers, with mostly large-volume institutional players and whales maintaining meaningful participation.

"If we are bleeding new users but still have heavy dilution and retail outflows. There is no recovery. Maybe for btc But not alts far out on the risk curve," fellow trader Pentoshi added in his own discussion of the macro environment.

$219 Million Worth of Liquidations Recorded as Cryptomarket...

DAO Maker and COTI Technical Analysis: Do Buyers Have a...

It seems that the social media giant Twitter is now testing its newest additions...

DarkSide Ransomware Bitcoins worth $6.8 million have been...

Imagine Bitcoin as a Reserve Asset. What Then?

Governments have finally sat up and taken notice of crypto. For years they derided,...

A PHP Error was encountered