After last week’s phenomenal performance, Helium continues to show strong support at the $46 level. Currently trading at $45.9, HNT is keeping investors excited amid a recent partnership with Dish.

Last week HNT managed to nearly double in price, rising from $26 and peaking at $51. The big announcement came straight from Dish, stating that they have partnered with Helium’s network allowing customers to deploy their own 5G CBRS-based hotspots.

The Helium Network is a blockchain-powered decentralized network for IoT. Helium allows communication between wireless devices across their network dubbed “The People’s Network.”

Just the biggest real-world blockchain. Nothing to see here ????. pic.twitter.com/havIlzF1aJ

In recent news, looking at the official helium explorer we can see that there are over 300,000 hotspots currently live on the Helium Network. This milestone makes Helium the largest operating IoT blockchain. 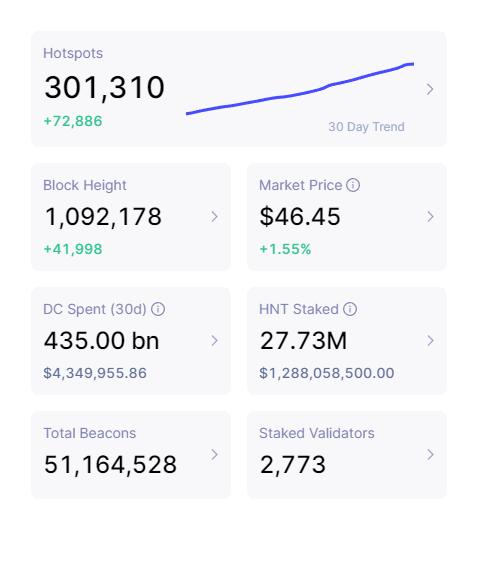 In addition, we can see that there are 27.73M HNT currently staked. With a max supply of 223M, this means over 10% of all HNT tokens are locked up.

An NFT Storm Brewing for OpenSea as FTX's New Platform...

Opinion: How to Kill Your NFT Project, Larva Labs Edition

Kazakhstan Could Earn USD 1.5B from Crypto Mining in 5...

What Did We Learn from the MonoX Hack?

Can I Create My Own Cryptocurrency?

Fintech and the evolving cybersecurity landscape

Bitcoin inches past $38K as Wall Street opens to strange...

A PHP Error was encountered